Judge Nicola Mathers had this to say in regards to the ‘Boobs on Bikes’ parade in Auckland.

It is ‘not offensive per se for women to be topless’; her court was not one ‘of morals and it was her job to stick to the law’; and that “It may well be that the parade is tasteless but equally it may be that in a more mature society the vast majority might consider it harmless.”

My comments on each: END_OF_DOCUMENT_TOKEN_TO_BE_REPLACED

Auckland City Council tried to stop the topless ride down Queen St., but Judge Nicola Mathers allowed it, commenting that it was ‘not offensive per se for women to be topless’, and that her court was not one ‘of morals and it was her job to stick to the law.’  She also said, “It may well be that the parade is tasteless but equally it may be that in a more mature society the vast majority might consider it harmless.” (source) END_OF_DOCUMENT_TOKEN_TO_BE_REPLACED

{***EDIT: The review discussed below – allegedly by Antony Flew of ‘The God Delusion’ by Richard Dawkins – is of uncertain origins.  I’m awaiting an email response to clarify the source.  Discerning how much Flew’s age is affecting his critical thinking is a difficult thing.  Poor memory doesn’t – automatically – mean poor logical thought.  I’ll update this when I hear more…***}

Dear Dale,
Sorry for the delay replying.  This was written by Flew who wanted to get it published. Flew mentioned
it to a mutual friend, who then spoke to me – I have seen a pdf of the original manuscript and some subsequent correspondence with Flew that took place during the process of publishing it (I live some distance from the mutual friend). Other friends have seen the original.
I hope that helps,
Chris Knight
Apologetics Website Co-ordinator

I’ve thanked him and also mentioned the challenge that Flew may well have been ‘helped’ (or bypassed?) in writings such as these, and have suggested that ‘bethinking’ posts further evidence about Flew’s authorship.  To be continued?  Maybe? ***}

Swiftly, his book “There Is A God: How the World’s Most Notorious Atheist Changed His Mind” (I didn’t write the sub-title – don’t blame me) was dismissed by some atheists as a ‘sad’ case of an older man losing his mental capacities, and being ‘manipulated’, etc. Some claimed that the book didn’t represent Flew’s own thoughts… END_OF_DOCUMENT_TOKEN_TO_BE_REPLACED

It’s not just those fundamentalist, conservative, annoying Christians who are concerned about our western over-sexed culture…

watch it here (worth all 20 minutes of your time).

Note: The scope of this thing is so huge, please don’t fault it for making sweeping statements – to cover what it does in 20 minutes, it has to make its statements as general as possible.

Now that we’re out of the 12-week ‘danger zone’, I can (happily) share that my wife and I (well, really just her!) are expecting a baby in late Jan / early Feb!!!

The little guy (we actually don’t know the gender – and might not choose to find out before birth – but I’m going with ‘boy’ all the way!) is about 5cm at this stage… :) 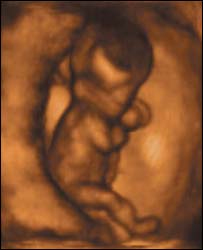 Will somebody please make a modern, well-produced movie about Dietrich Bonhoeffer!???

I think Matt Damon should play the part…  :)

What did they spend it on?

This makes me want to release a torrent of various expletives…

Each tax-paying American recently received hundreds of dollars to –yes– go shopping. The ridiculous rhetoric used for this was that of (as seen in the picture) ‘boosting our economy’. Why are they all smiling? Because you can rest assured, they all got rewarded (i.e. paid-off) wonderfully well by the various corporations that no doubt pushed this one through. END_OF_DOCUMENT_TOKEN_TO_BE_REPLACED

Some better questions would be ‘what kind of problem is it?’, ‘where does it come from?’ and ‘how do people deal with it?’

Don’t get me wrong…

the internet is great…

but the by-line for this online ‘friend’ site…

how to have a simple meal together…

sharing LIFE with each other.

That would be very sad…