Many a debate could (and should) be cut short by a simple observation:

Theists (more specifically, the young-earth creationist kind) often use the mystery of abiogenesis to attempt to dis-prove, refute or otherwise argue-against evolutionary theory. The quick retort from opponents (both atheists and theists) is that evolution and abiogenesis are not the same thing. To which I would eagerly agree. They are most certainly not.

But… (there’s always a ‘but’, isn’t there?) …are they not quite connected?

At the very least, they are connected in that if (a) life never emerged from non-life, then (b) there would be no life to change, adapt, evolve or progress. Abiogenesis, then, is the ‘foundation’ for any and all ‘evolution’.

(Be reminded – I’m not trying to employ a ‘God-of-the-gaps’ argument, by way of pointing to the ‘gap’ of abiogenesis to ‘prove’ that “…it must have taken God to do that.” I am unhesitatingly a ‘Creationist’ in that I believe God is the Creator of all things, and for that very reason I refuse to use mouse-trap arguments which speak as if God merely acted only once, ‘way back when’ to get things going, and then slipped into obscurity for the rest of history – save the chance ‘miracle’ here and there to remind people He exists.)

So what about the connection between abiogenesis and evolution? Is it merely a historical connection – in that one ‘happened’ way back when and the other is still ‘happening’? Are they over-lapping? (I was interested to discover, however, that an Irish scientist named Bernal suggested that Evolution may have begun before the formation of a cell (or ‘proto-cell’) – perhaps between the monomer and polymer stages. In other words, evolution before complete abiogenesis.) Could abiogenesis still happen? Could non-life still produce life? 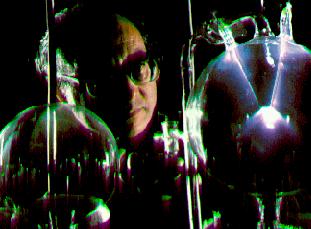 Miller (and Urey) tried to help it do just that. The oft-referred-to ‘Miller-Urey Experiment‘ saw a mixture of gases produce amino acids. The problem, of course, has been that these amino acids (a type of monomer) have to then combine into polymers, and then into something able to replicate. So, there’s a few steps left to get to ‘life’.

Following from this, recent attempts are being made (by folks at the Institute for Genomic Research) to engineer simpler and simpler cells (with less and less genes) to –effectively– show how this ‘leap’ might have been (or the more dogmatic way to say it – ‘certainly was’) a shorter one way back when.

Again, I’m not trying to ‘keep the gap wide for God’. But why must we assume that the first living things were incredibly simple? Is it because we can’t imagine it any other way? Is it because they have to have been simple or else it couldn’t have happened?

Much like the field of cosmology, the theories at this point splinter-off in innumerable directions, making it very hard to be precise and summarise at the same time. The questions are exciting and numerous. At what point can we officially say something is ‘living’? Just how would replicative things come about? Are things ‘alive’ before they can replicate? Can any of this happen today? If not, why not?

6 replies on “from abiogenesis to evolution”

This is such a cool topic and I can identify with your thoughts (no need to excuse the ramblings ; ) ). I studied cell bio at uni and left amazed at how complex the simplest of cells was and perplexed at how the first cell could’ve ever come about. It is a good question as to why isn’t it still happening now? I’m not sure that’d we notice if it were but I have heard that the conditions aren’t right. It seems to me that for DNA or even RNA to undergo the complex process of replication that there must be the right conditions and the cell membrane of a cell is vital in maintaining the right conditions. It can control what does and doesnt enter so that the enzymes needed for replication can function in a very specific environment. The problem is that the DNA/RNA is needed to make the membrane. They can’t exist without each other, so which came first???? I havent found any really convincing answer to how life first came about and thats exciting, I look forward to reading what the scientists can suss out. It can be a hard area to explore though because it gets into some pretty full on biochemistry. There’s also the problem of how to define life – I’ve stuck with the ‘cell’ definition but then of course there are viruses that can only replicate when attached to a host cell, so they are only living some of the time.

Thanks Jack,
Glad you could relate to my ramblings. :)
The abiogenesis page on Wikipedia mentioned this about the dangers which early would-be cells would have to overcome…

“For example, in an aqueous environment, hydrolysis of oligomers/polymers into their constituent monomers would be favored over the condensation of individual monomers into polymers. Also, the Miller experiment produces many substances that would undergo cross-reactions with the amino acids or terminate the peptide chain.”

I’m amazed at all this, and ever-aware that I could be accused of being anti-science. I’m not at all. Let’s do our durn-well-best to figure out and hypothesize about what happened or might have happened! But my sense is that we’re not able (at least currently) to speak with much certainty at all…
The question of ‘what is alive’ is indeed interesting. Your mention of viruses is good. What (if any) other things might possibly be ‘alive’ outside of cellular life? (not teenagers these days – pun on ‘cellular’) :)

((from Dale: This is a comment posted at my old wordpress.com blog – I thought it worthy of re-posting here – and re-opening comments, which I’d closed for spam reasons))

Abiogenesis can’t occur today because living things (such as cyanobacteria and plants) have altered the conditions of the Earth, transforming the atmosphere from a reducing atmosphere into an oxidizing atmosphere. The molecules that would be formed by a Miller-Urey-like set of reactions would be gobbled up by all the oxygen in the atmosphere, which is here because of photosynthesis.

None of this has anything to do with whether the early Earth was created by God, or by protoplanetary accretion, or by God using protoplanetary accretion. The transformation of our own atmosphere as recorded in the fossil record, and comparison with the development of other planets inside and outside our own solar system is unequivocal: High-oxygen atmospheres are rare if not unique to the Earth, and our atmosphere hasn’t been high-oxygen for very long (cosmically speaking). A collection of oxygen big enough for an entire planet can only (as far as we know) be made by life. It’s one of the central tenets of the Gaia Theory.

Reproductions of the Miller-Urey experiment that have been conducted in the 60 years since the early 1950s have refined the chemistry of the early Earth based on additional discoveries about the conditions on Earth before the introduction of oxygen. The chemistry of such experiments have even resulted in short sequences of RNA that are capable of making crude copies of themsevles. That’s what we can do in 60 years in reaction flasks less than a foot in diameter. But Mother Nature had a one-billion-year gap between the accretion of the Earth and the first unequivocal fossils of lifeforms (already photosynthetic at 3.5 billion years ago), in a reaction flask the size of the Earth. Yeah, there’s a gap there between the chemistry of our tiny, short-term experiments and the chemistry that can occur in all the world’s oceans over a one-billion-year time period. That gap is big enough for God having direct influence, but it’s also big enough for God to sit back and let chemistry do
its work.

Hi Altair,
Thanks for the good comment. Just last I read a bit in New Scientist about deep sea ventilation systems (possibly – they just don’t know for sure) being capable of generating electric currents which could (again possibly) be an obviously essential part of the process.

As a quasi-philosophical aside, I think two facts will always be amazing: 1) that anything exists at all, and 2) it flippin’ works!